Stations of the Cross / Via Crucis

Stations of the Cross / Via Crucis 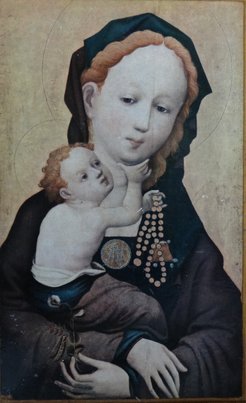 “There is so much evil around.
We need to form a prayer group.
We need to pray the Rosary!”

In June, a handful of us met at a local chapel to pray the Holy Rosary together. That first prayer meeting was long on enthusiasm and short on organization and we realized that we needed to put together a pamphlet with the most common prayers and meditations.

By August, we had produced a little pamphlet called “How to Pray the Rosary”, which made it easier for our participants to join in prayer regardless of how familiar they were with praying the Rosary.

During 2016, a new format, a “step-by-step” version, was developed. A retired researcher started to ask questions about the Rosary. He did not expect anyone to answer his questions. Instead he embarked on a quest to learn as much as he could about the Rosary, its history and the special position it holds as an instrument of the Mother of God. He delved into every available source he could find and took off.

We also moved to another, more private, Chapel, which allowed us to grow.

DEVELOPMENT of PRAYING THE STEP-BY-STEP ROSARY

The Rosary has long been considered as a most powerful weapon against the devil. The adversary does not rest, as everyone must be cognizant of today. It would certainly serve his purposes that important aspects of “How to Pray the Rosary” have been hidden away or ignored, like the many other essential tenets of our Faith that have become watered down during the past century, particularly.

IF, the Rosary hs long been considered a most powerful spiritual weapon against the devil ...

why is there not "one cristal clear version" presented by the Vatican?

This question guided us forward. Over the years we have studied and discussed our sources on how to pray the Rosary. We have questioned  and double-checked our material in order to find the proper way to glorify God through our work. And, how to best honour Our beloved Lady of the Rosary.

We have read about the apparitions of Our Lady at Fatima and we have read and talked about the weeping statue of the Blessed Virgin at Akita and Her apparition there. We have consulted the Codex Sinaiticus and questioned some modern translations of the mysteries. We have read those mysteries in several sources in English, German, French, Latin, Swedish and Spanish. It was quite clear that texts had been tampered with. Texts can differ based on the translator’s knowledge, on the political or social climate in a society, on carelessness, incompetence, or a zealousness to achieve change.

A major part of the step-by-step development emanated from reading the Bible texts before and after the suggested mystery. While we have followed the recommended Bible chapters linked to each mystery, we have occasionally added portions suitable to meditate on when praying the Rosary.

When Our Lady of Akita states that the only weapons at our disposal in the ultimate battle are “the sign of my Son and the Rosary”, it would stand to reason that our Rosary begins and ends with His Cross.

How are we to fight for Christianity if our weapons are not used in concert?

We love the Stations of the Cross,

a 14 stations devotion contemplating over the Passion of Christ.

It is a wonderful faithful spiritual pilgrimage.

Our Mother Church, the mother of Christ did not abandon her Son ...

In her time, the betrayal in the garden was done through the kiss of Judas, or in Her case, the blessing of the pagan tree and symbol.

We pray for the intercession of Saint Joseph, to protect Our Mother Church.

No true son abandons your mother!